How long do New Year’s resolutions last? It’s an odd question, because you’d think that the resolutions would last for the whole year. That’s what we’d all like to think.

But we know it isn’t true.

We all know that there’s a (really) good chance that most people, including ourselves, will have either abandoned or forgotten our New Year’s resolutions by the time February rolls around… if not, before.

I used to be big on New Years resolutions, hopeful for the future and determined that I would make the changes in my life necessary, to lead me towards the type of life I desired to live.

But as the years went by I became more and more disillusioned with myself, as each year I would look back and realise just how much I didn’t do. Knowing my life was almost exactly the same as it was at the beginning of the year, still poor, still overweight, still haven’t achieved the things that I said I wanted to achieve that year.

How do we make the resolutions last, then?

There are two ways that I’ve found, that really help to make the resolutions stick longer than the fireworks; and I’ll go over them both below. New Month Resolutions and Tiny Habits.

In January 2016 I implemented the New Month Resolutions; where instead of making lofty 12 month goals, I made 1 month goals. Smaller, but more immediate. I didn’t have time to procrastinate on my goals. I had to start implementing now, or I may as well not have any goals at all.

You know what it’s like. You want to run a 10km fun run at the end of the year. You train a little bit in January but it gets too hot (we’re talking Southern Hemisphere summer here) so you do more drinking a cool bevy in the hot summer evenings than donning your running shoes. But, it’s okay, because you’ve still got HEAPS of time before the 10km run in November. And time romps on by. Next thing you know, June has arrived and so has winter… and then it’s waaaay too cold to be getting up early in the morning to go for a jog. And you’ve still got plenty of time.

And then in August, your work sponsors a 5k fun run event for the end of September and in an effort to impress your new boss you let yourself be cajoled into running with the rest of your team. And now you have one month to train for the 5k.

I bet that it’s about now that you put away all the excuses you’ve had for not training for the last 8 months. In order to achieve this 5k goal (and not totally embarrass yourself) you must start training now. And so you do.

That is the power of New Month Resolutions. if you want something, you must start moving in the direction of what you want, NOW.

But, what if you just don’t want to? 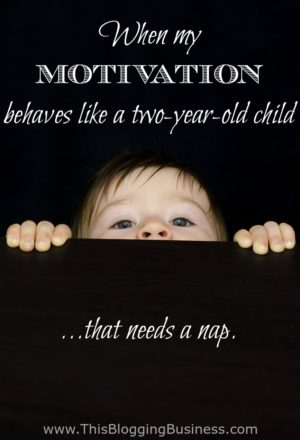 Here’s something I learnt just very recently. My motivation is fickle. I mean really fickle.

My motivation reminds me of a two year old child that wants the pink cup for my juice this morning and I don’t care that my sister already has the pink cup I want it NOW and no, NO OTHER OPTION WILL DO.

But the next day I don’t care.

Oh great. My motivation is a two year old child. (I don’t have kids, but I’ve heard that the two’s can be pretty tough to deal with. Yeah, my motivation is like that.)

And more often than not; this two-year-old needs a nap.

So if our motivation is so fickle… what else can I rely on?

Yep, I’m back on the habits band-wagon. To be honest, I never got off.

I think you already knew how important habits are, and how they make it so much ‘easier’ to walk towards your success. And I’m sure you even knew what habits you needed to make. But it’s the making of the habits that is just so darn hard. Am I right!?!

Just making the habit requires a mountain load of motivation. And loooong before any activity has become a habit, my motivation has already walked out the door.

And so when our motivation runs out, our fall back is willpower. I mean, we all have self-discipline, right? It’s pretty embarrassing to admit that we don’t, so yes, we all say that we DO have self-discipline or willpower, but there were other reasons that I couldn’t do such and such.

I’ve always preferred to be driven by motivation, rather than willpower. It’s so much easier and a darn sight more fun to do something because I really want to do it… rather than because I’m really good at making myself do it.

And it’s at this point, that tiny habits come in.

So we must rely on our willpower. But sheesh, do you have the willpower to go from being a couch potato to getting up putting on your walking clothes, finding clean socks putting them on and then your shoes, letting your significant other know that you’re going out for 20 minutes, finding your earphones, finding a 20 minute podcast and downloading it while you’re still on your home wi-fi and THEN walking out the door.

That takes A LOT of willpower. (Especially if going for a walk is as complicated for you as it is for me 😃 )

When I say tiny, I mean tiny.

For example, instead of saying I must go for a 20 minute walk every day, I will make the action so small that I can’t say no to it. Until it becomes a habit, and then my motivation will take over.

So instead, I will put on my walking clothes and queue my phone up with the next podcast I want to listen to. By doing this action every day, I am developing the habit.

Still too much? So I will make the action that I’m going to put on my walking clothes and shoes. Every day.

Still think your willpower will give out on you? Put on your walking clothes.

Not a small enough action? Get your walking clothes out.

Now that may sound like the stupidest thing to do. You want to get in the habit of going for a walk and yet you’re just getting your clothes out and that’s it? Yes, I know it seems totally silly, but by making the action so small, it doesn’t require you to use willpower to do it.

Chances are, you’ve started making the move so you’ll keep going. But if you don’t, you still give yourself the internal high-five, being satisfied that you have taken the action you set out to take and reinforcing that action every day, until it becomes a habit.

By implementing tiny habits, you don’t have to worry about how long your New Year’s resolutions will last. Instead you just need to concentrate of figuring out what tiny habits you’re going to add to your life; the ones that will lead you to your success.

What tiny habits are you going to add this year?

While I’ve been on the tiny habits bandwagon for a while now, it was reading Mini Habits: Smaller Habits, Bigger Results (Volume 1)

by Stephen Guise that succinctly explained how tiny habits allow us to skirt motivation and only use up the tiniest amount of willpower.

Please note that some of these links are affiliate links, so I earn a small amount if you buy anything through them, at no extra cost to you. I only recommend products that I use and love myself.

Next post Ever wondered HOW to have a good morning routine?

The Panic of a School Reunion