The Results of the No Sugar or Wheat Challenge 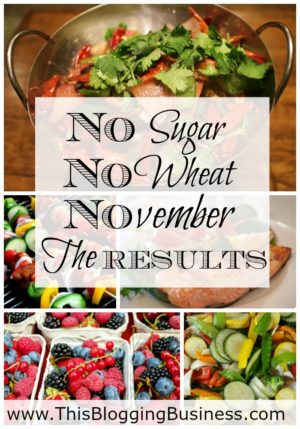 At the end of October I wrote a post about how I was going to give up sugar and wheat for the month of November, to see if either of those things had an influence on my ability to focus, concentrate and be productive.

So I set myself the challenge of having no sugar and no wheat for the entire month of November. I called it NOvember. (And I was pretty chuffed with that moniker, so don’t mock it! :-))

Since today is the last day of NOvember, let me catch you up on how that all went.

Was I able to maintain NOvember?

Going into the NOvember challenge I was pretty nervous. I’ve tried to reduce sugar before but would always get hung up on having a sugar in my coffee. And then of course giving up sugar meant giving up chocolate. And dessert.

And no wheat meant no bread, no stuffing, no crackers with my blue cheese.

I’m not going to keep you in suspense because I’m happy to report that … dum da da dah…..

I have not had any refined/processed sugar or wheat, this whole month.

I’m pretty proud of that. But… this gonna sound weird, I also feel like I may have cheated a bit. Why? Well, because it wasn’t nearly as hard as I thought it was going to be?!?

I came into this preparing myself for a battle of willpower, thinking that I’d have to be really strong for at least the first week or two, and then maybe, I’d find it easier. But as it was, it was much easier than I was anticipating.

There’s a few things, that I didn’t do on purpose, but I think they are what made this challenge easier than I was expecting:

So… what are the results of my NOvember? Well, let me tell you…

Note: I went into this challenge quite determined (in my head) that this was not about weight loss. Yes, I do need to lose a lot of weight simply for my own health, but I knew that if I focussed on the weight loss instead of just the no sugar, I would lose my way. It was always about being free from the grip of sugar, and in that respect, this has been a resounding success.

I’m not gonna lie, I am quite disappointed that I have not lost any weight BUT, this has not, in any way, made me think that the challenge wasn’t worth it. It was so worth it, just to be free from the cravings.

Yeah but what about the ability to focus, concentrate and be productive?

You can see that I haven’t exactly been scientific in my approach to this challenge so I don’t know how to quantify how my brain/mind feels after this challenge.

But I do feel like my brain is clearer. I think that I’ve been able to focus better. And I definitely have been more productive this month. I have written more (on this blog) and I’ve been much better at just getting straight onto the tasks at hand. I’ve had a running To Do List where things have been put on the list and actually crossed off at the end of the day because they got done!

So yes, I think that NOvember has definitely helped to clear my head and get back the ability to focus and concentrate.

From here one in?

I’m going to have something sweet in the next few days, probably chocolate. I’m curious to see how my taste buds like it. But other than that, I’m going to remain off the sugar until Christmas. I want to remain ‘no sugar’ for the rest of my life, but I’m just going to take it one step/goal at a time.

So there you go.

In my mind, this challenge was a raging success.

Have you ever noticed the influence that food has on your ability to think clearly? 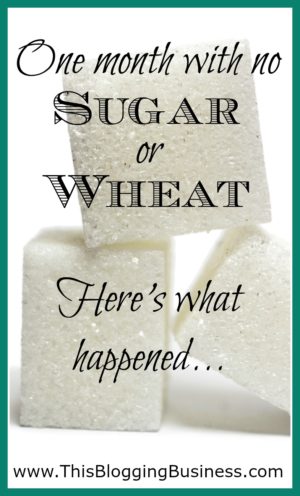 Previous post Creating a Habit - 5 Squats at a Time

What do food and personal development have to do with each other?